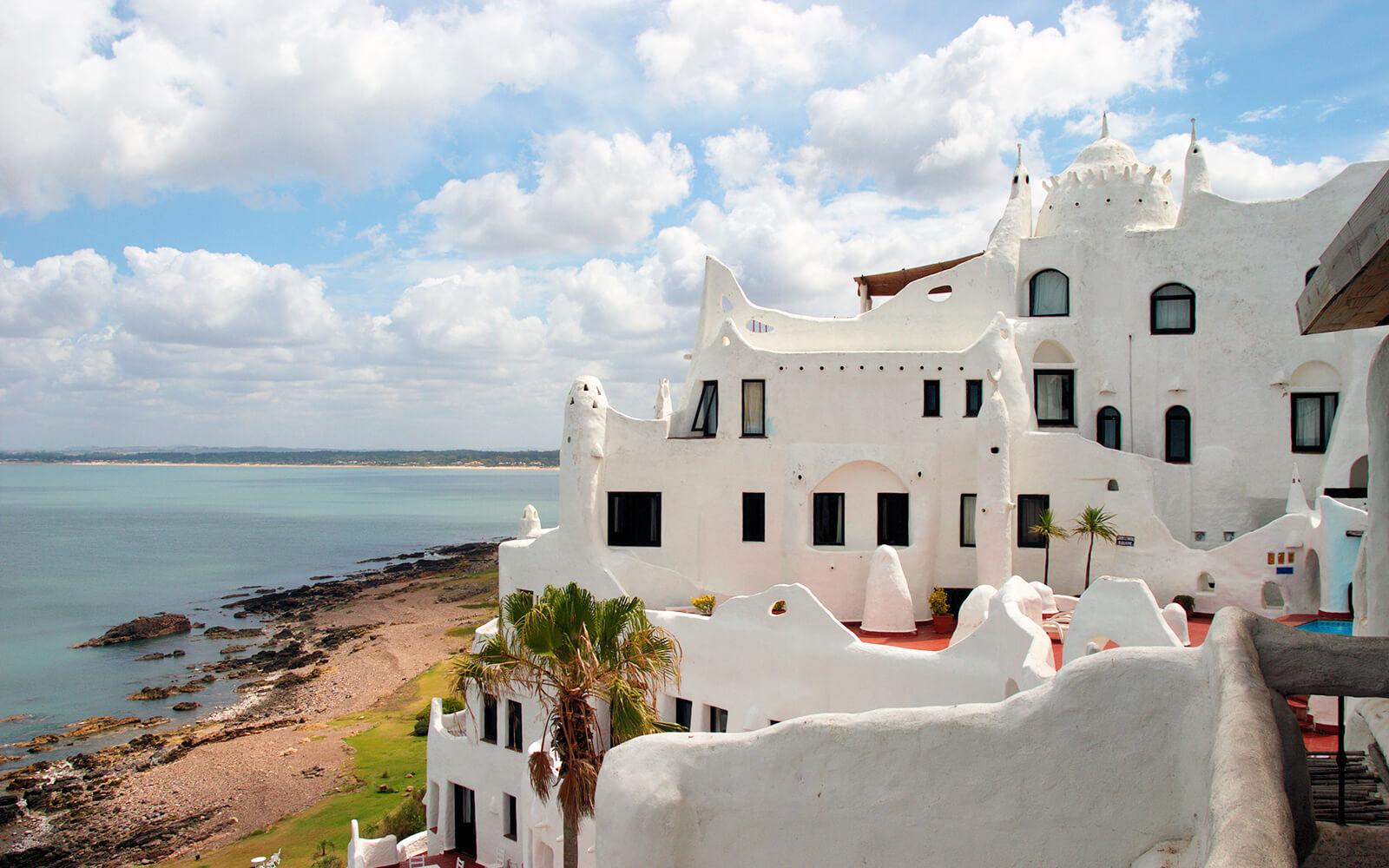 Combining characteristics from various places—a dash of laid-back California, rolling hills akin to Tuscany, and even the windswept sophistication of the Hamptons or the glamour of Cannes—Uruguay is a tiny country that packs a big punch.

A teardrop-shaped country about the size of the U.S. state of North Carolina, Uruguay is wedged between the giants of Brazil and Argentina, occupying a relatively discreet little slice of the Atlantic coastline. With such big neighbours, the country, travel-wise, is relatively overlooked in comparison, which is exactly why it’s one of my favourite places to travel on the continent. Once you get here, you, too, will understand its appeal. Don’t let South America’s best-kept secret slip through your fingers! Here are some of the quintessential things to know before you go.

A Bit About Uruguay

Intriguingly, this progressive little country is known as one of South America’s most socially advanced, and was named The Economist’s ‘country of the year’ in 2013. The country was founded in the year 1825, where it declared independence from the Empire of Brazil. The first indigenous inhabitants of the country were the Charrúa people, a small seminomadic tribe of hunter-gatherers, who were largely eliminated in the 1500s by European colonizers. The first wave arrived in 1512 from Portugal, followed closely by the Spanish, who entered the territory in 1516.

The capital of Montevideo was established in the early 18thC by the Spanish, who took advantage of its natural harbour and port for strategic reasons. Fought over by the British, Spanish (who sought to expand their colony of Argentina), Portuguese (who sought to expand Brazil), a three-hundred-year tug-of-war ensued. Uruguay eventually gained its independence after a long struggle, with its first constitution adopted in 1830.

The southernmost capital city in the Americas, Montevideo sits along the bank of the Rio de la Plata and ranks high in liveability, reaching the top of the list in Latin America, according to a 2017 Mercer report. First founded by the Spanish in 1724, it is home to about 1.3 million people, it is the political, economic, and educational hub of the country.

From its mix of colonial and modern architecture, this beachside capital has much to recommend it, in particular, its 22-kilometre (14-mile) oceanside pedestrian avenue, La Rambla. The longest continuous sidewalk in the world, it’s one of my favourite places to start or end the day. You can jog, bike, stroll, and people-watch, as it’s a popular gathering place for friends, especially to view the sunset. There is no development on the beach side so your view is completely unobstructed. For another touch of local culture, head to its market, Mercado Puerto, filled with restaurants and shops, along with the traditional parilla barbecue meal. Pair it with a glass of local wine.

The historical part of the Ciudad Vieja (Old City) is filled with national heritage sites and colonial buildings. A few major sites include the main square, Plaza Independencia, where you can see the remnants of the fortifications that once guarded the city, and the Artigas Mausoleum, a monument to the ‘father of the nation’, José Artigas. You’ll also see the Palacio Salvo, completed in 1928, which was once the tallest building in Latin America; it remains a point of pride today.

There’s always a ‘second city’ in every country, but Punta del Este stands out on its own. This gorgeous resort town of about 220,000 residents swells to three times its size in the balmy summer months (late December through March). Oft-compared to Miami or Cannes, the city has received all kinds of nicknames aligning it with even Monaco, St. Tropez, and the Hamptons of South America. No matter the reference point, you get the idea: glamorous, beachy, chic, and sophistication is what Punta del Este possesses in spades.

Filled with arts, music, and cinematic festivals, along with a fine dining scene and intriguing architecture and visual landmarks—such as ‘La Mano’, the giant hand that seems ‘buried’ at X beach; the circular Laguna Garzón Bridge, designed by homegrown starchitect Rafael Viñoly; and even pretty whitewashed Casapueblo, built by the Uruguayan artist Carlos Páez Vilaró.

I haven’t even mentioned the colonial architecture that derives from its Portuguese roots (the town was founded in 1907).  Just a bit east of Punta del Este, you’ll find sculptor Pablo Atchugarry’s foundation and studio, a place where we visit (and if we’re lucky, will catch a glimpse of the artist working on his massive sculptures) on a pleasant bike ride!

Where moneyed Uruguayans go to escape the madness of the city, this gem is what inspires the ‘Montauk’ moniker of the area. The lone landmark is its pretty lighthouse, at the edge where the shore meets the ocean, where you can climb for a panoramic look out at the sea and the town.

Located about a 40-minute drive east of Punta del Este, this once unremarkable fishing village has transformed into a bohemian, fashionable sanctuary where people come to unwind, littered with mansions, weekend homes, and some truly stunning resorts. From juice bars to yoga studios and artsy curated homeware and fashion stores, you get much more than one expects of a town that has a year-round population of several hundred.

Some harken to the colonial era, set upon grassland where you can just imagine ranchers and cowboys rustling cattle (not to mention polo players).  A bit further inland, you also can’t miss Restaurante Garzón, a restaurant by the fire-obsessed Patagonian chef, Francis Mallman, who decamped from Jose Ignacio once it got too busy. He single-handedly put Garzón on the map as a spot to make a pilgrimage to his flame-kissed experiments in food.

Uruguay has so much diversity packed into a relatively compact country, and I would be amiss if I didn’t say something about the rural areas, including the winelands of Canelones, just on the outskirts of Montevideo. For bikers who like a challenge, there are areas that resemble Tuscany in the undulating quality of their hills, and for me to say they are merely ‘rolling’ is a bit of an understatement. Whether you’re riding around on two wheels, roaming the countryside by horseback, the way it was once done, hiking, or as you hit the coast, trying your water legs at surfing, kayaking, or stand-up paddleboarding, there are so many instances when you’ll look around and forget that you’re in South America, so diverse are the spaces, cities, towns, and landscapes. Once again: don’t let your unfamiliarity with Uruguay deter you from taking a chance on, quite possibly, your best trip yet.

Located in the La Barra district at one of the country’s highest points, Hotel Fasano Punta del Este highlights the rustic elegance of the Uruguayan countryside in thirty-two bungalows, each with a private terrace offering panoramic views. The first Fasano restaurant outside of Brazil is also located here, offering spectacular views of the property to complement the family’s sophisticated culinary offerings.

Merging exceptional design, flawless personalized service, environmentally minded practices and an unparalleled collection of contemporary Uruguayan and international art—Estancia Vik is a remarkable property set in a magical backdrop where Marlboro country meets virgin San Tropez. Each suite has been imagined by an individual Uruguayan artist who has created works of art from these spaces.

Perched on the dunes of the Atlantic, this property is the essence of unpretentious sophistication. The 11 beach-side bungalows and 18 suites look over Mansa Beach, a secluded paradise, each one designed and decorated differently, with vibrant colours and unique bathrooms, but all with the utmost attention to using local materials like wood, steel and zinc. An open courtyard and infinity pool just a few steps from the sand make this a must in Jose Ignacio.