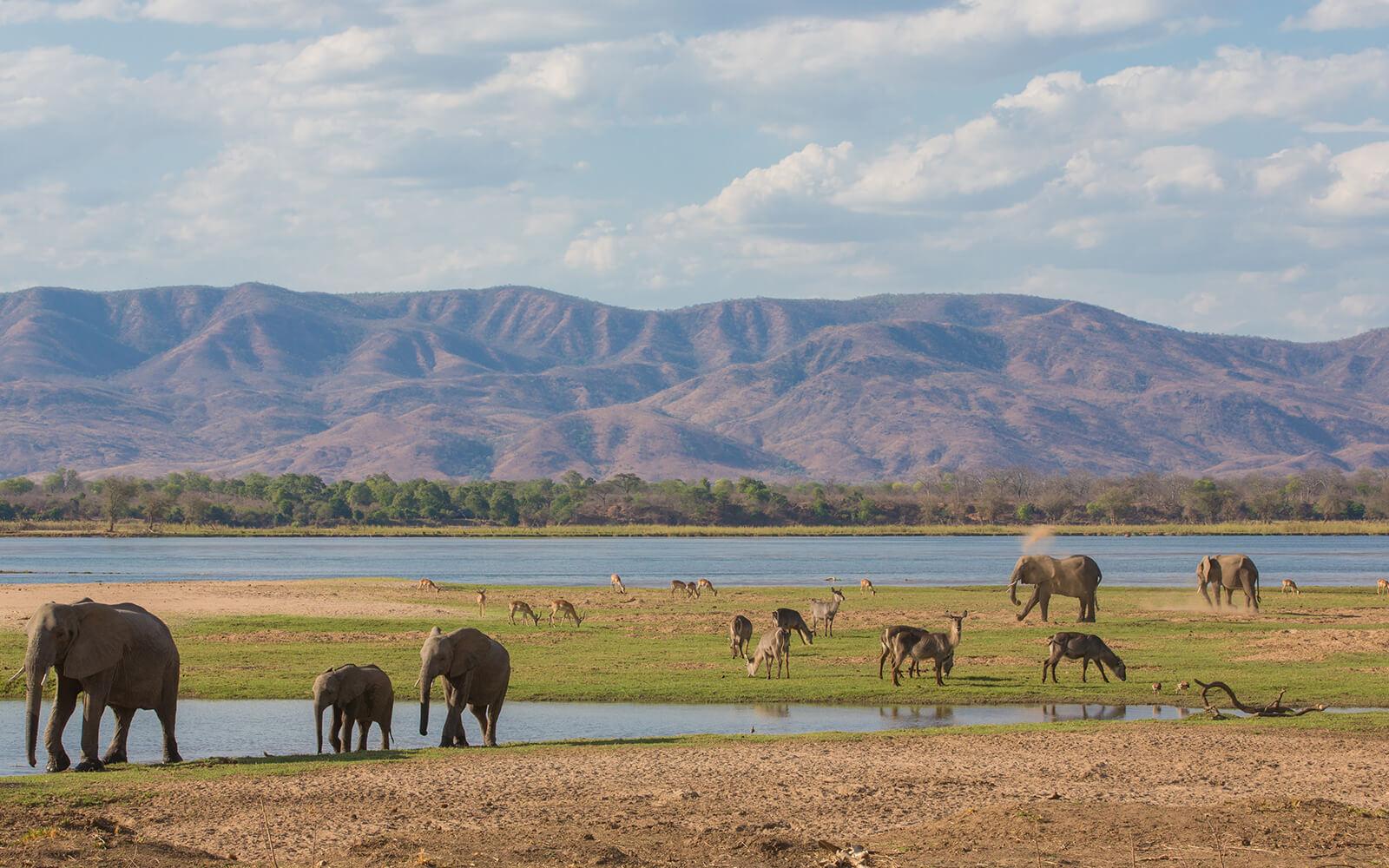 The Slow Road | Africa and Middle East | By Michele Harvey

As a Butterfield & Robinson Trip Designer, I feel the calling to highlight some of the world’s, and especially my home continent’s, rarest and most wonderful places. While we have seen many of these incredible places in photos or videos, I can attest that nothing ever truly compares to the real wonder of stepping into these fantastic, remote, and often rarely-visited places to see and experience them on your own. The richness of Zimbabwe’s wildlife and geography has never really worn off on me, and over the years, I have never once tired of returning here to marvel at our natural world. Here’s an introduction to some of Zimbabwe’s highlights, the country’s most spectacular places that you must see in this lifetime!

The Zambezi River and Victoria Falls

One of the great rivers of the world, nicknamed ‘Besi’, the Zambezi is impressive on all counts: it is the longest east-flowing river on the African continent, and the largest flowing into the Indian Ocean from Africa, though, at 2,574 kilometres (1,599 miles) long, it is only the fourth-longest river on the continent. One side of it is in Zambia, and the other side is in Zimbabwe, and it is at Victoria Falls where the dividing point between the upper Zambezi and the lower Zambezi river is located.

The Zambezi’s main draw is Victoria Falls or Mosi-Oa-Tunya, ‘the smoke that thunders’. One of the seven natural wonders of the world, it’s not the highest or the widest waterfall in the world, but in height and width, it is rivalled only by Iguazu Falls in South America. When visiting this region, it’s important to be aware of the rainy season (November through early April) and the dry season (the rest of the year). During full flood season (February to May with a peak in April), the spray from the falls can rise to over 400 metres (1,300 feet) in the air.

A rainbow can be seen at most distances whenever you visit Victoria Falls, but one of the most beautiful (and rare) things to see is the ethereal and ghostly-spectral ‘moonbow’ on evenings when a full moon is high in the sky.

The core of this hauntingly beautiful park are the Matobo (or Matopos) Hills, granite kopjes—isolated rock hills and mountains—that jut out of the otherwise flat land. The oldest national park in Zimbabwe, it was established in 1926. Originally named Rhodes Matopos National Park, a special bequest from Cecil Rhodes, whose burial site is in these hills, this is also the site of the 1896 indaba (meeting) between the Ndebele and white settlers, which ended Zimbabwe’s First War of Independence.

Covering an area of 424 square kilometres (164 square miles), this fantastic spot is filled with massive granite boulders that seem to balance on their own. Part of the park is also set aside as a 100-square-kilometre (39-square-mile) game preserve.  The wildlife is set in the game park, and species that have once been poached out have been re-introduced here, including a white and black rhino population which is on the rebound. The largest concentration of black eagles (including breeding pairs) in the world is here, as well as the world’s densest population of leopard.

It is a giant playground of balancing boulders—massive and simply incredible. When you are here, it’s best to take a vantage point from up high to see the vistas. The views are expansive and seem to go on forever and ever. This spiritual and ancestral home of the San people (who first inhabited this region two thousand years ago) ties in the cultural elements of this landscape; they have left their mark here for all time with their rock paintings. There are more than 3,000 artworks found here, along with artifacts. Some of the standout sites of rock painting include Bambata Cave, Inanke Cave, Nswatugi Cave, Pomongwe Cave and White Rhino Shelter. You’ll see friezes of giraffes, elephant, kudu, rhino, warthogs and more. These lands are also sacred to the Shona and Ndebele people, with many ceremonies and rituals taking place here.

The largest natural reserve in the country, this park was founded in 1928, with a vast area of 14,651 square kilometres (5,657 square miles) of area edging the Kalahari desert, along with vast woodlands of teak and mopane trees. With more than 100 mammal and 400 bird species to be seen in the park, all of Zimbabwe’s protected animals are found in the park, including a large population of Cape wild dogs, gemsbok and the harder-to-find brown hyena. There are so many diverse areas and ecosystems in the park that there is always excellent game viewing year-round.

Elephants have been very successful in the park, which has also led to some debate over whether the population should be controlled or left as is; there is an open corridor between Botswana and Zimbabwe which was a traditional corridor for elephant migrations.

It is also here in Hwange National Park where the most famous lion in the world, Cecil, lived for 13 years before his death in 2015 by a trophy hunter. Even before his controversial death, he was the best-known animal in the national park and many travelled there to view him. In 2017, his son Xanda suffered a similar fate. Along the northern edge of the park, you will find the remote Bumbusi National Monument and its ruins and rock carvings, an archaeological site that was declared a national monument in 1946.

A UNESCO World Heritage Site, Mana Pools spans 219,600 hectares of land along the lower Zambezi River, a land of transition from floodplain into rainy-season lakes. As the cycle of summer returns, these lakes gradually dry up once more, as the ebb and flow of nature continues its eternal cycle. During the rainy season, the park attracts a wide range of animals who congregate where the waters gather, and is one of the continent’s richest game-viewing hotspots. The largest concentration of hippos and crocodiles in the country is found here; in the dry season, you can expect to find massive herds of zebra, elephant and Cape buffalo. Other species to be found here include the lion, cheetah, Cape wild dog, brown hyena and leopard.

This national park sits on the southern shore of Lake Kariba (the world’s largest man-made reservoir), in the north end of the country. The national park’s name has been taken from the nearby Matuzviadonha Hills. First proclaimed a non-hunting area in 1958, a game reserve in 1963, then a national park in 1975, it is comprised of 1,400 square kilometres (540 square miles) of plains and mountains. With the permanent grazing on the shore, this area has become a place where large herds of Cape buffalo, Defassa waterbuck, zebra and impala thrive. Look out for elephants and a population of black rhino who have been relocated here, as well as leopard, warthog, greater kudu and bushbuck. From grasslands to woodlands as well as rugged escarpment, this remote park is one where few tourists visit. It is best accessed by boat or small aircraft, but it is worth the visit!

The park is also notable for a fascinating wildlife rescue operation that has largely gone forgotten. When the Kariba Dam was constructed in the late 1950s, flooding the Zambezi Valley, a wildlife rescue operation took place to relocate more than 6,000 animals to new homes over five years, from elephants, antelopes to the smallest animals like birds and snakes. Without the technology they had today, conservationists and volunteers were literally catching animals, transporting them on rowboats(!) and taking them to higher, drier land, now the national park.

Where to Stay in Zimbabwe

This is the grand dame of the Singita portfolio, a benchmark for modern conservation. Blended among the mopane forests and ancient baobab trees and resting high atop a rock tableau, Singita Pamushana Lodge holds an air of reverence. As the commercial arm for the Mila Trust on which it lies, Pamushana is entrusted to preserve the natural habitat and better the lives of the people in the neighbouring communities. Enlightened ethos aside, we’d be remiss not to highlight the spectacle of the lodge as well, which is that of extreme luxury in the most tasteful manner.

Pitched along the edge of an ancient seasonal floodplain, Somalisa Camp, in the heart of Hwange National Park, bears witness to one of few remaining great elephant sanctuaries in Africa. Lucky for you, in this authentic bush camp elephants brazenly sidle up to the “Elephant Hole” at the edge of the camp’s wooden deck and take their fill. A natural watering hole just a few metres beyond allows for larger crowds to congregate (again, of the elephant variety). Don’t worry, plunge pool, open-deck homestyle dining and tented residences that are infused with old-world charm all mean that those of the human variety also get to have some fun.

Back to The Slow Road Blog
Photography credit: Matobo Hills by Susan Adams via flickr
Kudu in Kariba by paulafrenchp via flickr